What is the difference between a Sash Window and a Casement Window?

Homepage > Uncategorised > What is the difference between a Sash Window and a Casement Window? 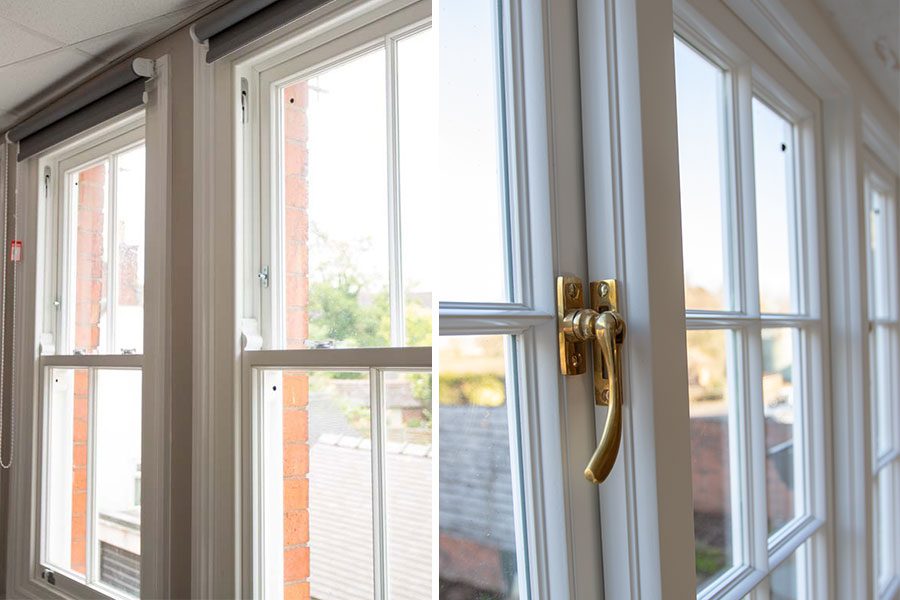 What is the difference between a Sash Window and a Casement Window?

What makes a Sash Window different from a Casement Window?

What is the difference between a sash window and a casement window is a question we hear a lot at Gowercroft Joinery. In order to answer the question we’ve created this blog post and noted down the main differences between the two types of windows. We’ve also tried to to help you choose which is best for your home.

So if you have ever asked the question “What is the difference between a Sash Window and a Casement Window?” – read on!

5 Key Differences between a Casement and a Sash Window

A sash window usually consists of a wooden frame in the wall aperture with two windows in. Each window is roughly half the size of the opening with a slight overlap, with one window behind the other. The window can be opened by raising the bottom window, which will slide vertically in channels in the outer frame. This more common format is called a ‘Single Hung Sash Window’. When both windows are able to be opened, then this is unsurprisingly called a ‘Double Hung Sash Window’.

A Casement Window opens horizontally on a hinge

Casement windows are built with one large window within the outer frame. This is hinged and generally casement windows open outwards, like a door. Popular during Tudor and more recently, the vast majority of modern windows are casement.

3 – How much light they let in

A casement window will allow more light to enter a room than a sash window. This is because a sash window will always have to have the horizontal frame where the two panes meet. A casement window can allow a single sheet of glass to be fitted. This means that the room receives better lighting. It can also mean that the inhabitants of the room can have an unobstructed view of the outside world.

4 – Casement Windows allow ventilation to even the smallest openings

Because a casement window is hinged, it can be made to fit the smallest of apertures and still open to allow ventilation. Even a long and narrow slit can have a fully opening window fitted. Because of the way a sash window is operated, they are impossible to fit to openings of under a certain size – roughly no smaller than 2 feet by 4 feet.

Because a casement window creates a tight seal when closed – the handle can force the window to fit the frame very snugly – then they are generally better at insulating that a sash window. That doesn’t mean that a sash can’t be made draught-proof, it’s just that casement windows are naturally better insulated by design.

For the same reason, casement windows are generally more secure that sash windows. Because the window is held tight in the frame, they are difficult to prise open. Hidden hinges and multiple locking mechanisms in modern windows make them very difficult to break into. Again this doesn’t mean that a sash window can’t be made secure, it just takes a little more work to make it so.

A casement window is very simple – the window swings open on 2 or more hinges that take the weight.

A sash window must be lifted – and as windows got larger and larger, then mechanisms had to be introduced to assist with the opening of them. An ingenious mechanism of weights and pulleys was developed over time that allowed even the frailest of serving girls to open the largest of sash windows with ease. As people became more skilled at building windows, these mechanisms were hidden in hollow recesses in the window frames to create smoother designs. Of course, more moving parts means more maintenance and things that can go wrong, and it can be difficult to access the ropes, pulleys and weights when they have been sealed in the window frame for a few hundred years. A latter day sash window is build with modern technology and materials, making it unlikely to suffer a malfunction during the lifetime of the window.

So which is better – a casement or a sash window?

There isn’t really a straight answer to this question. If you are on a tight budget, then definitely a casement window would suit you better. However, if you are more interested in style, then it’s difficult to beat the traditional looks and the air of sophistication that a sash window can add to your home.

There are situations where you absolutely need to fit a sash window. This is usually when the property is either a listed building or is situated within a conservation area. In this case, it would be a requirement of the local planning authority to carry out any renovations to look as close as possible to the original appearance of the building. In the case of older buildings, this would mean fitting sash windows.